skip to main | skip to sidebar

Lots has happened since we last left you and went to Ati Atihan festival. We'll start with the two days we spent at the street carnival. Since it was an absolute nightmare finding a room in Kalibo, which is where the festival was held, we found a tiny village by the sea about 30 minutes drive away. We stayed really in the middle of nowhere, but it was really beautiful spot and it saved us a fortune because all hotels in Kalibo had put their prices up by around 5 times!


The whole Ati Atihan festival lasted for weeks, but we were there for just the last 2 days, which were the biggest with dance & costume competitions. All the local villages enter a team into the festival, all of which have their own distinct costumes and dance style, so for example there was a duck-village, which had these very cool duck-like outfits, and there were also spiders, owls, bats, coral, butterflies, and other less obvious themes. We've got some very cool photos which we'll try to get onto flickr, so you can click on the pictures on the right and see more. All of the dancing was done to very loud and enthusiastic drumming and music as well, so it really was a proper fun carnival.

It was a very cool thing for us to see, because it's apparently the biggest festival in South East Asia, and we've never been to anything like that before. There weren't many western tourists, just loads of Philipinos dancing and - mainly - drinking. It had a very relaxed atmosphere, and anyone could just join in with any of the groups and wander in and out taking photos. We came back with a new hat that an excited dancer gave us, and I got covered in black face paint as well. 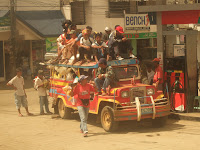 Having festivals and fiestas in the Philippines means that the locals are super hospitable. We even got given free lunch. We went into a cafe to get some lunch and coffee, and they just gave it to us for free! In the evenings we got jeepneys back to our hotel. They're "buses" made from old American army jeeps, which they extend back massively. They were so many people travelling on them in the evenings that all the men including Dan had to travel on the roof, and just hold on for dear life. It was fine until it started to rain... He looked like a drowned rat when he finally climbed down. All in all, a great weekend!

After the festival we went to Boracay island, which is the country's main tourist destination. Although obviously it was veeery touristy, it was actually a lovely place, with hugely long pure white beaches fringed with coconut palms and no big buildings near the coast, so the beach where we were was very tranquil and it felt like it was a lot more unspoilt than the reality. Some of it was very busy and not very nice, but we just didn't go to that area. What Dan loved was that it had one beach that never got any wind and was great for swimming & sleeping, whilst the other side of the island had a beach that was always very windy and full of windsurfers and kitesurfers.


It was my birthday on Boracay as well, and Dan got me a number candle to blow out, but he only got number 1 for me, it never crossed to get the first number as well, so I guess I had my 21st birthday there! We had some lovely cocktails and some beers to celebrate. But after a few days relaxing on the beach I managed to get really ill, it started with really high fever and developed into acute bronchitis (first doctor thought it may have been pneumonia) and I was totally out of it for over a week. The two doctors I saw both wanted to admit me into the hospital, but they both said the hospital is so bad it might not make me feel any better to be there... So we decided I'd stay at our bungalow instead! Dan was a great, although a little bit bored, nurse for me, and I got through lots and lots of medicine, and I'm now finally better. So our few days on Boracay island turned into 20 days before the doctor finally allowed us to fly out to Laos via Manila and Bangkok. Dan finally managed to windsurf on our last day on the island, and he had a great time.


The language is a funny thing in the Philippines, because they quite happily mix English, some Spanish words, and lots of the regional local dialects. All the signs tend to be in a sort of ghetto English, so they use "d" instead of "the"! And they use speechmarks around inappropriate words or phrases, for example: We are "happy" to serve you. It's great!


We're now is Luang Prabang in Laos and it's freezing here! But we're having a great time because we happened to bump into Heiko & Nicole whom we got to know in Halong Bay in Vietnam, so it's been fun seeing them again and playing lots of cards. And we're also loving the food here, there's so much fresh fruit & vegetables and yummy things here, so we're eating all the time!


We'll write more once we've seen a bit more of Laos. We've also put up lots of really nice photos from the Philippines, so make sure you go see them as well.


By the way, we only have one more month to go, yikes!

We are happy to read your new adventures in Philippines and know that Jenni is fine after some days of being ill. We are sure you will enjoy your last month of traveling and we hope to see you again, once you go back home. You know, UK is not so far from Barcelona!!

Kisses and a big Hug from Javi and Mercè

Glad to know you're better. Looking forward to "death by Slides" when you return. Stay healthy and happy.Lots of love Mark & Grandma Jean

So glad that you are better now Jenni. Most impressed at your calm account of what must have been a scarey time. We were certainly worried here(massed agonising in the shop!)
Enjoy your last few weeks. Can't believe that so much time has passed.
Looking forward to seeing you.

I don't think you're in the Philippines any more....

I think FINN-is(h) correct, you much have FINN-ISHed your Philipines so far and you are so far from Philiphines already. Come on, start FINN-ISHING your trip, you must be over the FINN-NISH line or border already!

This is a Flickr badge showing public photos from The muggers. Make your own badge here.

This section has been reinstated, with full consent from my wife this time! So here it is, in proper alphabetical order (with exciting bold formatting for the surprising new additions!):